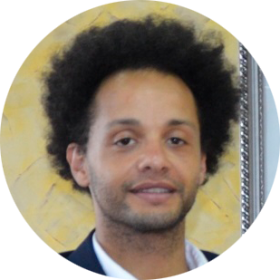 His father is Cameroonian, and his mother is Spanish. Georges is founder of Koop SF 34, a sub-Saharan social business incubator based in the San Francisco quarter in Bilbao. A second-generation immigrant, he has a Master’s Degree in new information technologies from Lübeck University, and another degree in business from Northumbria University, in the UK.  He invests in the potential success of immigrants by boosting their capacities within his business incubator. Koop SF 34 promotes the idea of high specialization and value-added jobs to be found among a base of immigrants who shouldn’t otherwise seek to compete with locals.

Koop SF 34 seeks to exploit the relational and knowledge strengths among the African immigrant collective as a key to ensuring their success, as opposed to the traditional approach whereby weaknesses are merely minimized. The unfortunate result of this latter approach is that it introduces immigrants into a labor market in a disadvantaged position that opens the door to labor exploitation, while simultaneously increasing marginality, weakening the labor market as a whole, and promoting the growth of xenophobia and racism.

Belinga understands social entrepreneurship as the only formula to hatch a more diverse and integrated society, where nobody is forced to lose their identity, and where nobody is left behind.

Koop SF 34 champions secularism and panAfricanism among the second generation of immigrants. He sees this as a project that gives a voice and a reputation to the work and talent of immigrants; moreover, it seeks to generate roots within the immigrant population, as a roadmap in the fight against radicalization resulting from the not-belonging feeling that Georges has observed in his vital experiences in Germany, France, and England.